Tourists from the UK are returning to previously popular destinations that have suffered in recent years due to terrorist incidents or civil unrest, such as Turkey, Tunisia and Egypt, according to the latest findings from ForwardKeys and GfK which predicts future travel patterns by analysing booking transactions by travel agents.

The big winners are Turkey, Tunisia and Egypt, although the two Arab countries have yet to recover their full potential. Turkey with the biggest market share of the three, is showing a 66.4% growth in UK leisure bookings on last year; Egypt is ahead 50.9%, and Tunisia – with a 0.7% share – is ahead 901.0%.

Leisure bookings to perennial favourites or ‘safe’ destinations, Spain and Portugal have fallen back 2.5% and 0.2% respectively, according to the combined ForwardKeys and GfK data, although their visitor numbers have been kept high in recent years as a result of the threats to other destinations.

“The findings reveal the true impact that terrorism had on Middle Eastern and North African destinations in the last few years, including Morocco, and show that recovery has only recently begun,” say the analysts.

STILL A LONG WAY TO GO…

“In terms of scheduled capacity, Egypt and Tunisia both have a long way to go to reach their 2015 levels. In the third quarter of this year, Egypt has 46% of seats available three years ago, and Tunisia, 38%.”

However, ForwardKeys and GfK do say that Turkey’s recovery is progressing much better. Seats on direct flights from the UK are back to 94% of what they were in 2015.

The latest ForwardKeys and GfK research – carried out for a joint presentation with HSBC Global Research – shows that overall UK leisure travel is ahead 4.9% this summer.

ForwardKeys CEO and Co-Founder, Olivier Jager, said: “These findings illustrate the ultimate resilience of travel and tourism. Tourists are prepared to reassess their impressions of a destination if it manages to remain safe for an extended period of time. It’s encouraging that the countries previously affected by unrest are seeing their tourist marketing efforts pay off in hard figures.” 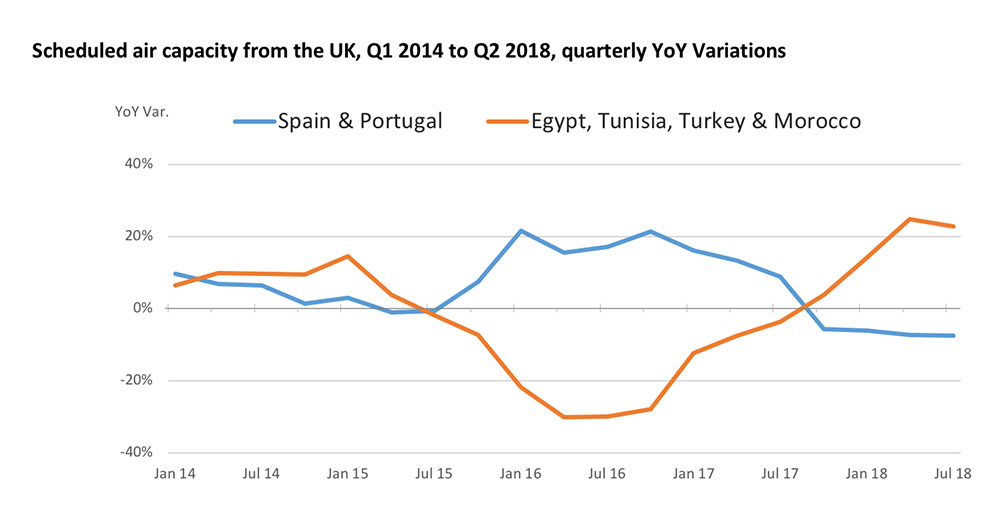 David Hope, Senior Client Insight Director, GfK market research, said: “The growth is driven by the dynamism of short and mid haul summer destinations, up by 7.7%. These destinations represent around 60% of British international travel in the summer period.

“British tourists are flocking back to Turkey, Tunisia and Egypt, after the security incidents in 2015 and 2016. Spain and Portugal will see slightly fewer tourists, while other European destinations, including Greece, Croatia and Bulgaria, maintain an optimistic outlook.

“The full recovery of North African destinations will require some time. This summer, the scheduled air capacity will be only half of what it was in 2015 for Tunisia and Egypt.”