There are about 238 million people across the seven countries in North Africa according to a UN-based report. The region has an internet penetration rate of 49%, second only to Southern Africa’s 51%. Social Media penetration in the region is 38%, the highest on the African continent with the most used messenger apps being Facebook Messenger and Whatsapp.

In terms of development, the region has some of the highest HDI figures in Africa per a UNDP report released in 2016. Algeria and Tunisia have high HDI figures of 0.745 and 0.725, ranking 83rd and 97th respectively out of 185 countries on the index. Since HDI incorporates the level of education and GDP per capita in a country, it helps to give an idea of what digital literacy might be and also how capable residents are to afford digital services. We attempt to explore key statistics on digital activities in four North African countries; Egypt, Algeria, Tunisia & Morocco based on a January 2018 ‘We Are Social’ report by Hootsuite, the 2016 Mobile Economy report by GSMA Intelligence, among others .

About 37 million people access Facebook every month in Egypt with 64% being male and 36% female. Tunisia has 6.4 million Facebook subscribers while Algeria and Morocco have 19 million and 15 million subscribers respectively. For Tunisia, 42% of Facebook users are women while 58% are men. The total number of social media users in each country is not so far from the above figures, there are 7.2 million active social media users in Tunisia, 21 million in Algeria, 39 million in Egypt and 16 million in Morocco, according to the 2018 ‘We Are Social’ report by HootSuite. 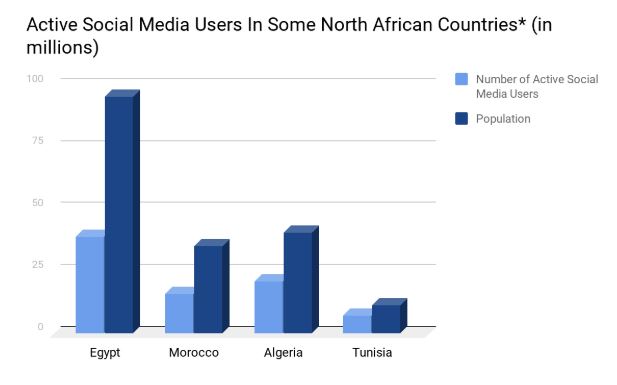 Of the top 15 websites in Egypt based on monthly traffic, classifieds (e-commerce) platform OLX is one of them according to a SimilarWeb 2017 ranking. Two out of the top 15 websites are e-commerce websites. At least 7.8 million people in the country were reported to have bought something online in 2015. Average spending per online shopper was $641 USD in 2017. In Morocco, consumers were reported to have spent $209.55 million on online shopping in 2017. For Tunisia, the leading online e-commerce website (in terms of web traffic via SimilarWeb) is Tayara.tn, Souq.com leads in Egypt,  Ouedkniss.com in Algeria while Avito.ma leads in Morocco. 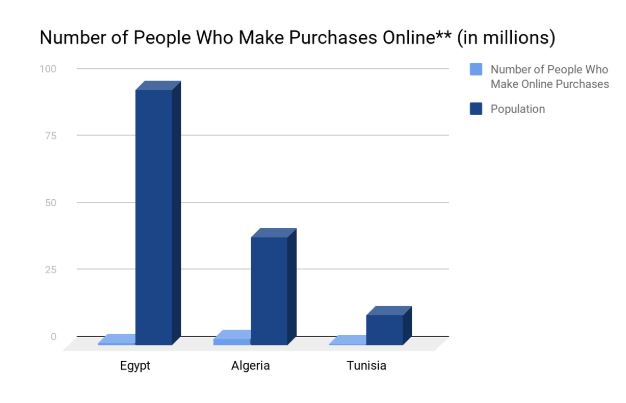 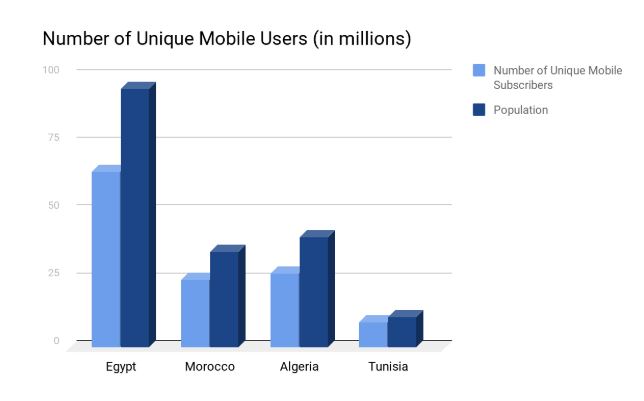 In conclusion, while there is a relatively high level of social media and mobile penetration in the North African countries explored (Algeria, Morocco, Tunisia and Egypt) there is still a huge gap in terms of online shopping and financial inclusion.

*Data used was from the 2018 We Are Social Report by HootSuite.

** Same as above, no data was available for Morocco.